What is MK-677? What effects can you expect from using it? Does it have any side effects? What should you be aware of before buying? I will answer these and other questions in the following article.

Ibutamoren, also known as MK-677 and Nutrobal, is a substance created at the beginning of the 21st century by Merck & Co. 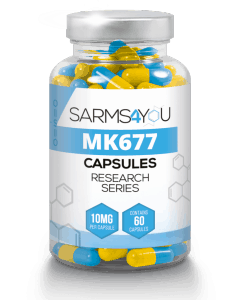 It is a substance that stimulates the secretion of growth hormone and insulin-like growth factor IGF-1. This means that Nutrobal does not directly affect the level of these hormones, but only indirectly signals to the body to produce more of them.

It binds to the GHSR receptors, thus it also affects all the functions associated with them – appetite, mood, memory, biological rhythm and cognitive skills.

Ibutamoren is currently being studied for its ability to prevent muscle wasting and obesity diseases, increasing bone density and as a cure for hormone deficiency. Recent results of clinical trials confirm reviews of people using MK-677 so far, proving that high hopes placed in this substance were not unfounded.

Unfortunately, despite a large list of advantages, Ibutamoren also has side effects.

The next one is an increased appetite. Ibutamoren increases the secretion of ghrelin, commonly known as the hormone of hunger. Unfortunately, this side effect cannot be avoided in any way. While this is not a problem, when bulking or during Post Cycle Therapy, it is a serious problem during cutting. That is why not many people use this substance for this purpose, even though it increases the basic calorie requirement of the body, so in theory, it facilitates reduction.

When using MK-677, it is also common for increased water retention to occur. While it does not mean that we will immediately look like a Michelin man, which is the case with some steroids, it is a certain disadvantage, especially for people with a low level of body fat.

Ibutamoren is an excellent substance for regeneration or as an addition to other SARMs/steroids. It speeds up building muscle mass but is not as strong as other SARMs.

I started using MK-677 back in the days when I was using steroids. At that time, I used it mainly in the periods between cycles. It regenerates joints perfectly and allows you to maintain more gains. Due to its method of action, it does not interfere with sex hormones so it can be used even during PCT. It’s hard for me to say how much mass can be built on a solo cycle, but I wouldn’t expect spectacular effects. During ‘cycle’, you can certainly see the water retention – in my case, it is usually about 2kg, but I know people in whom this number can be even twice as big.

I also used Ibutamoren in combination with other SARMs and was very satisfied with the effects. Like Ostarin, MK-677 is also suitable as an addition to virtually every steroid/sarm cycle showing synergy effects. The only downside is the price, which is quite high in relation to the effects and required time of use.

Most people who use Ibutamoren choose to go with 20-30mg. For cutting I would suggest 20mg per day, and for regeneration or bulking 30mg. Some individuals decided to try much higher doses – 100mg but did not experience significantly better results.

Ibutamoren can be used all year round without a break if our wallet allows us to do so.

Most people prefer to use MK-677 before bedtime to avoid problems with sluggishness during the day.

Unfortunately, the content of most products sold as SARMs has little to do with the label. Due to the high cost of SARMs in wholesale, most products have less substances than declared. An even more popular solution used by retailers is adding anabolic steroids or prohormones. For this reason, SARMs should only be purchased from reliable suppliers who have a certificate of analysis for each batch.

The most popular shop in the world at the moment. They offer SARMs only in the form of a solution. Each product comes with a pipette and information on how many drops corresponds to one millilitre. On their website, there is a phone number so that any ambiguities can be resolved within a few minutes. They provide a certificate of analysis for each product, which can be obtained by sending them an e-mail. The company offers a loyalty program “Peptide points” in which we collect points that reduce the cost of future orders. Shipping from the USA.
Click here to check price

The store has been present on the market for about two years. It quickly gained popularity on forums and Reddit thanks to good quality products at affordable prices. Like Proven Peptides, they only offer SARMs in the form of solutions. Unfortunately, the product does not come with a pipette. You need to buy a syringe (available on the website) or another liquid measuring device. Certificates of Analysis for each product can be found on the site. Shipping from the USA.
Click here to check price

Relatively new store. It is not very popular at the moment, probably due to high prices.  Their products have a higher purity than most of the products on the market (about 0.5-1% higher). They sell not only SARMs but also Aromatase Inhibitors and PCTs. The products are in the form of tablets, which are considered by many to be a more convenient option. They have a certificate of analysis for each product. Shipping from the USA.
Click here to check price

The time of administration does not affect the absorbability of the substance. However, most people choose to take it in the evening before bedtime to avoid problems with lethargy during the day. Yet, few people have better luck with morning dosage, so you should take the substance at different times during the first week to see what works better for you.

Yes – Ibutamoren is completely safe. It only affects the level of growth hormone and IGF-1. It can be used by women, children, elderly, etc.

There is no indication that Ibutamoren can cause cancer. Of course, it should not be given to people who already have cancer, because increasing the level of growth hormone and IGF-1 can accelerate its development.

The half-life in oral use in humans is approximately 24 hours.

Ibutamoren can be used without breaks all year round. The only limitation is our wallet and our goals.

At the time of writing this article, Ibutamoren is legal in USA and the majority of other countries.