Contents hide
1 What is Stenabolic?
2 Benefits
3 Side effects
4 Dosage
5 Before and after
6 Results
7 Stenabolic vs. Cardarine
8 Where to buy Stenabolic?
9 Frequently Asked Questions
10 References

What is SR9009? What kind of effects can you expect from using this product? Does it have any side effects? What do you need to know before buying SR9009? Answers to these and other questions are provided in the following article.

Stenabolic, also known as SR9009, was discovered by Professor Thomas Burris of The Scripps Research Institute. It is commonly classified for simplification as SARM (Selective Modulators of the Androgen Receptor), although in fact, it is an agonist of REV-ERB. Its mechanism of action is quite complicated. 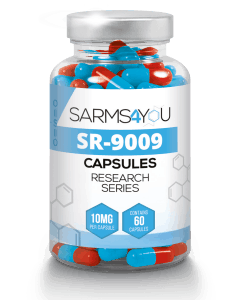 Rev-erbα is a protein found mainly in fatty tissue, liver, muscles, and brain. It affects the daily rhythm of these tissues, widely known as the “biological clock”. This rhythm is defined as a series of patterns occurring in our body during each day. It synchronizes with sunrise and sunset.

This mechanism works as a loop that activates and deactivates individual genes. For example, when the basic helix-loop-helix (bHLH)-PAS (Period-Arnt-Single-minded): CLOCK and BMAL1 genes are activated, the body subsequently begins transcription of the PER and CRY genes.

SR9009 was created to counteract Sarcopenia – the age-related destruction of skeletal muscles by the body. Currently, Sarcopenia is treated with anabolic steroids (mainly Deca Durabolin), but these have side effects, especially when administered to elderly people with health problems. In theory, the solution to this problem could be Stenabolic, which does not currently have any known side effects.

One animal study observed that in addition to increasing muscle mass and strength, Stenabolic also had an effect on their daily rhythm, which intrigued scientists.

In animal studies, SR9009 also improved the endurance of mice while reducing anxiety, inflammation, and cholesterol levels. Mice that were given Stenabolic ran longer, were better focused, and were more alert.

In addition, as mentioned at the beginning of this article, Stenabolic increases the activity of REV-ERBs, which enhances the bioavailability of nutrients.

Treatment of diet-induced obese mice with a REV-ERB agonist decreased obesity by reducing fat mass and markedly improving dyslipidemia and hyperglycemia. These results indicate that synthetic REV-ERB ligands that pharmacologically target the circadian rhythm may be beneficial in the treatment of sleep disorders as well as metabolic diseases.

If the same results could be observed in humans, this would mean that SR9009 may have similar health benefits to physical activity. For this reason, SR9009 is often referred to as “training in a pill”.

Unfortunately, no clinical trials on humans have been conducted yet, so it is not clear whether this product behaves in the same way when consumed by humans.

However, due to the satisfactory results of animal studies, many people have decided to use this product without waiting for the results of clinical trials.

No side effects of this substance are currently known (although some individuals have reported problems with insomnia). Animal studies indicate that it is entirely safe. The opinions of users so far confirm this hypothesis.

Since Stenabolic does not affect the production of hormones in any way, it can be used by women and does not require PCT. It is currently considered to be as safe as e.g. MK-677.

SR9009 is most commonly used in a dose of 30mg or 40mg per day. Due to the fact that this agent has a very short half-life (about 4 hours), the daily dose should be divided into several portions in order to maintain a stable concentration of the substance in the blood. It is recommended to take the product 3-4x daily. For the sake of convenience, many people choose to take SR9009 with every meal.

Most people opt for 8-week cycles with 4-week breaks between them, so that the body does not get used to the substance. However, I have come across the opinion that such breaks are not necessary.

Stenabolic does not have the slightest effect on the production of hormones. For this reason, PCT is not required.

People who use Trenbolone or other substances that make their endurance worse can add it to their cycles. This agent does not interfere with the work of other substances and does not cause additional side effects.

Stenabolic is a great substance that allows you to get rid of fat quickly. It may not have such spectacular effects as Trenbolone or Clenbuterol, but it is undoubtedly much stronger than typical fat burning supplements. At the same time, it does not cause any side effects.

The effect that is rarely mentioned, and which I have observed in myself (or rather my wife), is increased stamina in bed.

These two substances are very similar in terms of their use in sport. The only clear difference is the half-life. In the case of Cardarine it is 16 hours and in the case of SR9009 about 4 hours.

Due to the fact that these drugs work through other mechanisms, many people decide to combine them. Personally, I think this is an excellent idea. These agents intensify their action and give excellent results.

If you decide to use them separately, however, my choice would be on GW-501516. It has similar effects to SR9009, but it is much more convenient to use.

Where to buy Stenabolic?

Unfortunately, most SARMs and similar products on the market have little to do with their labels. It is common to add prohormones and oral anabolic steroids to reduce costs. Equally often there are less substances in products than declared on the label. This is due to the high price of these drugs in wholesale. For this reason, they should only be purchased from trusted sellers who have a certificate of analysis for each product.

Currently the most popular SARM store in the world. They have received hundreds of positive reviews over the years. Proven Peptides offer SARMs only in the form of solutions. Each bottle comes with a pipette and information about the amount of agent one drop corresponds to. On the website, there is a phone number that allows you to get answers to any questions within a few minutes. A certificate of analysis issued by an external laboratory can be obtained for each product via e-mail. They offer a loyalty program “Peptide Points” in which the points earned reduce the value of future orders. Shipping from the USA.
Link to their website

Relatively new store. Currently, it is not very popular. However, it offers SARMs of very good quality. For each product, you can easily get a certificate of analysis from an external laboratory. In contrast to Proven Peptides, they offer SARMs in the form of injections and capsules, which many prefer over solutions. Apart from SARMs, they also offer PCTs, peptides, and drugs for erectile dysfunction. Shipping from the USA.
Link to their website

What is Stenabolic half-life?

The half-life of this product is approximately 4 hours. This means that it should be taken several times a day to maintain a stable level of the substance in the blood. It is advisable to divide the daily dose into several portions and take it with each meal.

Yes, this product does not interfere with the hormonal system, and therefore, there are no contraindications for women to use it as well.

There is currently no indication that this substance may increase the risk of cancer. No side effects have been observed in any animal studies so far. It is also considered completely safe by the athletic community.

Moreover, Stenabolic is currently being investigated as a potential cancer treatment.

Notably, the selective anticancer properties of these REV-ERB agonists impair glioblastoma growth in vivo and improve survival without causing overt toxicity in mice.

At the time of writing this article, Stenabolic is legal in the USA and most countries of the world. However, it is on the WADA list, so it cannot be used by competitors.